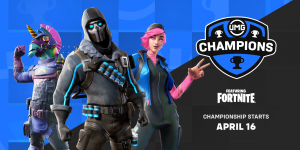 UMG Champions will run qualifiers on April 9th, and 10th, with the grand finals kicking off April 16th. The format is an “Elimination Race”, where pairs of two will compete in squad lobbies to accumulate the most eliminations possible.

UMG Gaming provides a community platform that welcomes gamers of all levels to play for cash, community recognition, and other compelling prizes.

UMG Champions is yet another example of an event that will give aspiring Fortnite players the chance to compete against some of the best players in the world, and prove they have what it takes.”
— Ryan Summers, VP of Operations

NEW YORK, NEW YORK, UNITED STATES, April 7, 2021 /EINPresswire.com/ — UMG Gaming, a competitive gaming platform offering large ladders to head-to-head matches, is set to debut a new tournament series, enabling esports amateurs to play against some of their professional idols. The launch of “UMG Champions” will focus on the competitive esports scene for Fortnite, and will feature a $25,000 prize pool for any player willing to run the gauntlet. “Champions” tournaments will expand to other popular titles as the competition platform establishes itself as the preeminent brand in competitive esports across.

For esports enthusiasts looking to tune into the live action, the finals will be live streamed from the UMG Gaming Twitch channel. The live broadcasting will also serve as the unveiling of WinView Games’ newest audience play-along experience, enabling fans to get closer to the action through a native Twitch Extension where viewers can answer predictive questions on how the tournament will unfold for points within the same viewing screen. WinView, another subsidiary of Engine Media headquartered in Silicon Valley, is the market leader in audience live broadcasting play-along gaming experiences.

“Since its inception, UMG has always been a place where players of all skill levels can have the opportunity to compete in the games they love, and show the world what they got,” said Ryan Summers, VP of Operations. “UMG Champions is yet another example of an event that will give aspiring Fortnite players the chance to compete against some of the best players in the world, and prove they have what it takes.”

Gaming fans are hungry for action packed battle royale live streams, in particular the genre’s leading title Fortnite. This presents an enticing opportunity for brands and advertisers looking to connect with a demographic of hard-to-reach consumers. In February 2021, gamers watched 127 million hours of Fortnite live streams on Twitch, YouTube and Facebook Gaming, making it the third most watched game in streaming.

“We could not be more excited for the launch of UMG Champions” said Eric Vaughn, COO of Engine Media esports. “Building grass roots esports ladders is a need within the current esports landscape. We are proud to offer amateurs the chance to go head-to-head with pros for a chance to win significant prizes, and the chance to be watched by thousands of viewers. Additionally, our WinView Twitch extension will provide a broader fanbase the chance to take part in the action by predicting on pros competing in the event.”

With the launch of UMG Champions, UMG will continue to be a market leader in competitive gaming, bridging the ecosystem by connecting players, brands, publishers, and viewers into a single experience to help grow the esports industry.

“UMG Champions” will run qualifiers on April 9th, and 10th, with the grand finals kicking off April 16th. The format is an “Elimination Race”, where pairs of two will compete in squad lobbies to accumulate the most eliminations possible. For full information on the tournament, visit UMGGaming.com and follow on Twitter @UMGGaming.

About Engine Media Holdings, Inc.
Engine Media Holdings Inc. is traded publicly under the ticker symbol (TSX-V: GAME) (OTCQB: MLLLF). The organization is focused on developing premium consumer experiences and unparalleled technology and content solutions for partners in the esports, news and gaming industry. The company’s subsidiaries include Stream Hatchet; the global leader in gaming video distribution analytics; Eden Games , a premium video game developer and publisher with numerous console and mobile gaming franchises; WinView Games, an industry innovator in audience second screen play-along gaming during live events; UMG, an end-to-end competitive esports platform enabling the professional and amateur esport community with tournaments, matches and award nominating content; and Frankly Media, a digital publishing platform empowering broadcasters to create, distribute and monetize content across all channels. Engine Media generates revenue through a combination of direct-to-consumer and subscription fees; streaming technology and data SaaS-based offerings; programmatic advertising and sponsorships. To date, the combined companies’ clients have included more than 1,200 television, print and radio brands, dozens of gaming and technology companies, and have connectivity into hundreds of millions of homes around the world through their content, distribution and technology services.