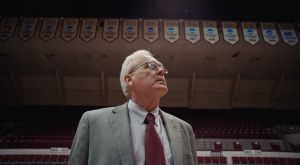 The House That Rob Built

LOS ANGELES, CA, UNITED STATES, March 22, 2021 /EINPresswire.com/ — A documentary about The University of Montana women’s basketball program entitled THE HOUSE THAT ROB BUILT released nationally for digital download and rental on March 2nd. The movie is co-directed by Jonathan Cipiti, and former University of Montana Lady Griz Megan Harrington.
The documentary chronicles the inspiring story of Robin Selvig, pioneering coach of UM’s Lady Griz basketball team. In an era when gender discrimination in sports was the norm, Coach Selvig built a house of inclusion and empowerment by recruiting female athletes from the ranches, farms and Native American reservations of Big Sky Country. For nearly 40 years, these athletes would establish the preeminent women’s basketball program west of the Rockies.

Montana has a long history of producing some of the greatest Native American women basketball players, dating back to the 1904 World’s Fair where a group of 10 women from a diverse mix of tribal backgrounds and attending the Fort Shaw Indian Boarding School were celebrated as the basketball champions of the world in St. Louis.
The documentary chronicles the stories of former Lady Griz players including Native American women who came to UM to play NCAA Division I basketball, earned a college degree and went on to successful post collegiate careers. For his efforts in recruiting Native American players, Coach Selvig became one of the few non-Indians to be inducted in the Montana Indian Athletic Hall of Fame in 2008.
“To think that we were all from small towns, reservations, small ranch towns, pretty, pretty amazing,” states Malia Kipp in the film. Kipp came from Browning, Mont. to play for the Lady Griz from 1992-1996. She is one of five different Native American women featured in the film and one of the first in the country to be offered a DI scholarship.

Kipp inspired more Native American women to follow in her footsteps and play basketball at the University of Montana including Simarron Schildt.
I think Malia being the first trailblazer. It’s like something happens in your mind when you see somebody else do it. I’m not 100% positive I would have tried to play for the Lady Griz if I wouldn’t have seen her do it first. According to Kipp in the documentary, resources and opportunities were limited on the reservation, but everyone had basketball. Coach Selvig fostered talent across the state, even in areas that were often overlooked such as Kipp’s hometown of Browning. “Getting the opportunity to go to school on a Division I scholarship was amazing.”

Paving the way for other young Nativer American players also helped LeAnn Montes, Box Elder, MT native and member of the Chippewa Cree Tribe overcome obstacles and pursue her dream.
“Having a child in high school was a really big challenge,” saidMontes. 3. “From that point on it was no longer about me. I know Rob was taking a risk with bringing me on, which I’m really grateful for. It would have been easier for me to stay on the reservation.Rob basically held my hand throughout that entire first year and reassured me that I would be continuing on with the program the second year.” Montes went on to become attorney general for the Chippewa Cree Tribe.

Summing up what it meant to be a player coming from the reservation to play in Rob’s “house”, former player and Montana Indian Athletic Hall of Fame inductee Simarron Schildt said, “Coming in, It was super normal as a Native to want to give up, to feel out of place and want to come home. But, he (Rob) touched my heart in a big way, he played a lot of roles: he was a father, mentor and friend and I felt comfortable there, I felt safe and seen. “The house was strong and sturdy, it was a safe house and I could move right in”.
Selvig is #10 in the line-up for winningest coaches in women’s basketball, touting a .752 winning percentage. Among the 10, he is the only one not in the women’s college basketball Hall of Fame.

A New San Diego Channel is Coming to Town

Known for Moving in the Prophetic, Tracy Cooke Releases a New Book That Makes Spiritual Gifts Approachable for Everyone