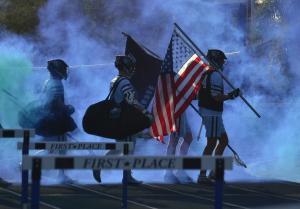 BOCA RATON, FL, USA, April 3, 2021 /EINPresswire.com/ — Next week, Saint John Paul II Academy’s (SJPII) lacrosse team is entering district playoffs on the road to the state championships on a strong foot, having recently secured an 18-1 victory against Boca Raton High School. The teams have a longstanding rivalry, and as the 2020 lacrosse season was canceled due to the pandemic, this victory reinforced the strong foundation and teamwork that SJPII has fostered over the years.

From the start of the season, SJPII stepped up and delivered incredible victories, and now, SJPII is currently on a winning streak. The team used this energy to propel them through their game with Boca Raton, not only rising to the challenge but also demonstrating great leadership, perseverance, and a bit of panache. Freshman attackman Mike Evans’ behind-the-back goal even went viral on the Press Lacrosse Instagram page, off of a feed from junior midfielder, Henry Konsker, who had 2 goals on the night. Senior, Charlie Shannon went 90% at the faceoff X against a very talented athlete from Boca Raton, Chris Testa (sophomore). Landon Reichert, SJPII’s junior goalie, and the assistant captain had a near-perfect game, only allowing one goal, while Trevor Dick, (senior and High Point commit) led his defensive side with forced turnovers and transitions. On offense, Travis Dick (senior and High Point commit) had 8 points on the night with 5 goals and 3 assists. Travis set the standard by which his team followed as 8 more goal scorers emerged. Matt Evans, freshman midfielder had himself a night with a late-game hattrick and an assist. Before a minor injury, crease attackman, Jake D’Antuono had 2 goals on the inside with feeds from senior lefty attackman, Joe Dean. Dean had 1 goal in the Boca game, but Joe is the second leading attack scorer with 38 points this season so far, behind Travis Dick who touts an impressive 58 points, 28 goals, and 30 assists. Single goal scorers who added points were freshman, attack/mid-Morgan McMeekin, senior faceoff athlete, Charlie Shannon, and Sophomore midfielder, Kyle Davis.

The team is led by Head Coaches Andrew Bolger and his brother, Michael Bolger. Both played attack at St. Johns before spending the last 20 years building the SJPII program. The assistant coaches are Tom Dean (offense), Hunter Pearl (defense), Nate Usich (defense), and Michael Evans (offense).
Next week, the team will begin fighting through playoffs with the ultimate goal of being this year’s state lacrosse champion. With so many talented players, a strong foundation, solid leadership, and a true sense of camaraderie, SBJII is the team to keep an eye on this year. To see the Saint John Paul II Lacrosse program in action, please visit their Instagram account at @stjohnpaulii_lacrosse.