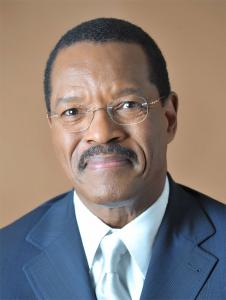 Bishop Blake accepted the invitation of The PuLSE Institute to join the National Advisory Panel, which serves as the brain trust of the Institute.

Potential for good is radically enhanced when we join together. Those who are blessed should bless others. I am proud to serve on The PuLSE Institute National Advisory Panel. Doing good!”
— Bishop Charles E. Blake Sr.

DETROIT , MICHIGAN , USA , April 2, 2021 /EINPresswire.com/ — Bishop Charles E. Blake Sr., Presiding Bishop Emeritus of the Church of God in Christ (COGIC), the largest Black Christian denomination in the country with a membership of 6.5 million, and an international statesman and humanitarian, has been named to the National Advisory Panel of The PuLSE Institute (Institute for Public Leadership and Social Equity), a national anti-poverty think tank headquartered in Detroit, the nation’s biggest Black city.

At the National Advisory Panel of The PuLSE Institute, Bishop Blake will join Dr. Arun Gandhi, the grandson of Mahatma Gandhi and a member of the board of the Nelson Mandela Children’s Hospital in South Africa, Sister Simone Campbell, a leading Catholic social justice advocate who gave the invocation at the 2020 Democratic National Convention, Dr. Bernard LaFayette, a top aide to Reverend Martin Luther King Jr. and the National Coordinator of the 1968 Poor People’s Campaign, former White House spokesman Robert Weiner, former presidential diarist Janis Kearney and other luminaries and figures to advise the Institute on issues of poverty and income inequality.

Bishop Blake accepted the invitation of The PuLSE Institute to join the National Advisory Panel, which serves as the brain trust of the Institute. Collectively, its members bring more than a century of impactful and transformative anti-poverty work to the Institute.

The addition of Bishop Blake, who is the senior pastor of the 25,000-member West Angeles Church of God in Christ in Los Angeles, California, which is the largest COGIC church, and one of the biggest churches of any denomination in the Western United States, brings a theological giant, and a dynamic and transcending force to the work of the independent think tank devoted to fighting poverty in Detroit and around the nation.

Over the decades the West Angeles COGIC under the leadership of Bishop Blake, has remained the home for spiritual renewal and guidance with members from loyal community parishioners to some of the nation’s Black cultural icons such as Denzel Washington, Stevie Wonder, Samuel Jackson, Angela Bassett, Magic Johnson and others. His church is a citadel of community empowerment on Los Angeles’ Crenshaw Boulevard.

“Potential for good is radically enhanced when we join together,” Bishop Blake said in a statement. “Ability constitutes responsibility. Those who are blessed should bless others. I am proud to serve on The PuLSE Institute National Advisory Panel. Doing good!”

Bishop Blake has distinguished himself as a major player on the local, national, and international stage. He has served on countless boards, coalitions, committees, councils, and executive teams. His influence is felt not only in inner-city Los Angeles, but also on Pennsylvania Avenue in Washington D.C. and in many other places around the world. He is a source of wisdom and council to religious and political leaders, including three former American presidents. President Barack Obama named him as a member of the President’s Advisory Council on Faith-Based and Neighborhood Partnerships. A towering voice for justice and equality, he was also chosen as one of four individuals to address the Democratic National Convention’s first Ecumenical Service.

Bishop Blake is greatly respected for his practical leadership and compassionate service to others around the world. For example, in response to the HIV/AIDS pandemic in Africa, Bishop Blake founded and served as president of the Pan African Children’s Fund (PACF). Save Africa’s Children, a program of PACF, supported more than 200,000 children in 400 orphan care programs throughout more than 23 nations on the continent of Africa who were orphaned by the HIV/AIDS pandemic. In 2003, Bishop Blake was awarded the Harvard Foundation Humanitarian Medal for his work with Save Africa’s Children.

“The PuLSE Institute is honored to welcome Bishop Charles Blake to the National Advisory Panel. Bishop Blake has demonstrated sincere and persistent commitment to fighting poverty around the globe while leading one of the largest African American congregations in the nation,” said Attorney Tina M. Patterson, the president and director of research at The PuLSE Institute. “He personifies the spirit and leadership of the revered Black Church, long-renowned for its ardent advocacy for equality, human rights, and economic justice. Bishop Blake has wielded his massive influence with dignity, integrity and moral conviction in defense of those surviving on the margins of society, immeasurable qualities that are still necessary as we continue to face the challenges of inequality.”

The founding of The PuLSE Institute in 2018, was inspired by the writings of the esteemed journalist, author and culture critic Bankole Thompson, whose illuminating and influential work on economic and racial justice issues has elevated the discourse around poverty and inequality in Detroit and Michigan. Thompson, who is a twice-a-week opinion columnist at The Detroit News and a daily radio host, serves as the editor-in-chief and dean of The PuLSE Institute.

In 2014, COGIC honored Thompson with the “Centennial Journalist Award” during the denomination’s Michigan/Ontario, Canada centennial anniversary by the late Bishop PA Brooks, the former dean of the faith community in Detroit, who served as the First Assistant Presiding Bishop of COGIC under Bishop Blake. Thompson was recognized during the centennial celebration keynoted by Bishop Blake for being a powerful voice in the media championing issues that sit at the intersection of faith and public policy in the Black community.

“At The PuLSE Institute, we are honored to have his eminence Bishop Blake join our National Advisory Panel. His work at West Angeles, on the national scene and on the global stage, represents the best of humanity. Bishop Blake has a big heart and is deeply concerned about those who have been ravaged by inequality. His ministry over the decades has been about caring for the many people who remain invisible in our society and have lost hope.”

Bishop Blake, an institution builder and a standard bearer of Black Church leadership in the 21st century, became the Presiding Bishop of COGIC after the death of Bishop Gilbert Earl Patterson in 2007, and was re-elected three times to the Office of Presiding Bishop in 2008, 2012, and 2016.

Designed Conviction Entertainment- From Prison to the Music Industry