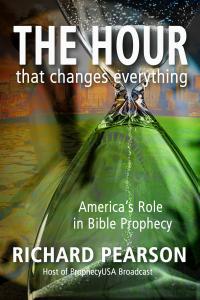 “The Hour That Changes Everything” by Richard Pearson (Prophecy USA) 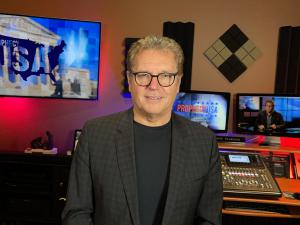 “The Hour That Changes Everything” and a companion Study Guide will be available on April 1, 2021 at Amazon.com and Prophecyusa.org.

If you wonder what is happening to America, ‘The Hour That Changes Everything’ will reveal to you what the Bible says is happening to the most powerful country in the history of mankind.”
— Richard Pearson

NASHVILLE, TN, USA, April 1, 2021 /EINPresswire.com/ — Prophecy USA is proud to present the eye-opening new book The Hour That Changes Everything by Richard Pearson. This new book unveils the hidden mysteries of America’s role in Bible Prophecy, and helps us discover where we stand on God’s ticking prophetic time clock. The Hour That Changes Everything and a companion Study Guide will be available on April 1, 2021 at Amazon.com and Prophecyusa.org.

Prepare yourself for one of the greatest events in Bible prophecy. The United Nations has a 2030 agenda. The World Economic Forum has “The Great Reset.” The Covid-19 pandemic has an accelerated mandate. But as the New World Order plans their world without God, nothing will be accelerated faster than the prophetic word God has spoken to the United States of America. It will be the hour that changes everything.

In 1986, Pearson had a spiritual experience that left him awestruck concerning things coming to North America… specifically, the United States of America. Pearson received personal counseling from Oral Roberts, who encouraged him to write down the prophetic images he was seeing. In his new book, Pearson documents in scripture every thing he was shown that is coming to the USA. Some events have come to pass, some are taking place and still others are awaiting fulfillment. Pearson’s goal is to clearly unveil in scripture the hidden mystery of America’s role in Bible Prophecy.

“If you wonder what is happening to America, “The Hour That Changes Everything” will reveal to you what the Bible says is happening to the most powerful country in the history of mankind,” says Pearson. “God’s hand is about to move in this great nation.”

About Richard Pearson: Richard Pearson is a 1977 Graduate of Oral Roberts University, former missionary pilot, and CEO of several Canadian transportation companies. In 1986, Oral Roberts appointed Pearson to the Board of Regents at Oral Roberts University, where he served on the Executive Board for 21 years. He was Acting Chairman of OREA of Canada and presently sits on the Canadian Board of John Hagee Ministries. In 1995, he founded Richard Pearson Ministries, Inc. and, in 2019, Richard Pearson Ministries of Canada. In 2015 he received an Honorary Doctor of Laws degree from the prestigious Canada Christian College and is ordained under Gospel Crusades International Ministerial Association of Bradenton, Florida. In 2020, Pearson launched the television program Prophecy USA which can be seen on multiple networks throughout North America. Pearson and his wife Karen split their time between Brantford, Ontario and Clearwater, Florida.

About Prophecy USA: Richard Pearson uncovers the hidden mysteries of America’s role in Bible prophecy in the weekly television program seen on multiple television networks throughout North America including NRB, TCT and INSP in the USA, and Vision TV, Faith TV and Joy TV in Canada. Prophecy USA encourages viewers to listen to what the prophets in the Word of God had to say. For more info, visit https://prophecyusa.org.

Don Bang is the hottest Amapiano artist in the scene and he is back with Club Bangerzz.

“FORGET IT” BY SPACEMAN / CHAOS & FASCINATION