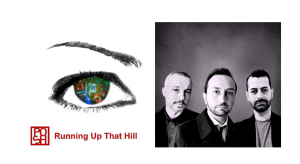 GERMANY, April 4, 2021 /EINPresswire.com/ — POSH are back on the scene after a ten-year stand-by. The Italian power trio have released their new single ‘Running up that hill’, an alternative rock version of Kate Bush’s famous hit.

POSH were born in 2001. The band is formed by guitarist and vocalist Salvo Minnella, Bassist and synth player Federico Salemi and drummer Alberto Minnella. Throughout the first decade of the millennium, the band stands out for its deep, melancholic sound. In simple words, just unique. In 2007 they represented Italy at the prestigious MIDEM (Marché International du Disque et de l’Edition Musicale) festival, held in Cannes, France, at the Palais des Festivals et des Congrès. In the same year, they released their first EP ‘Biancolilla’ which has gained a lot of exposure. Then, in 2009, the band released “La realtà celata delle cose” a full LP Album.

On 26th February 2021, the trio came back to the scene with “Running up that hill”, out on digital stores, which in few days has gained up to thousands of listeners.”Running up that hill’ is just a taste of POSH’s new work. In May, their third album will be released. Composed of Ten tracks, it will be an album that will certainly make people talk about it.

Are Japanese stocks overvalued or reasonable? Will the market surpass the bubble era in 2023? – QUICK Market Survey

5 Questions Accountant Konstantin Lichtenwald Wants You To Answer Before Investing