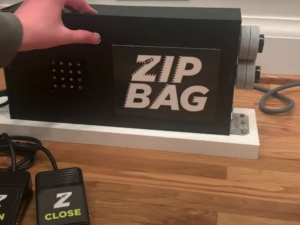 ZipBag is a finalist in the SourceAmerica Design Competition.

Catlin Gabel students are one of five high school finalists, along with three college teams, invited to compete in national engineering competition.

SourceAmerica didn’t think that teams would be able to fabricate prototypes this year, but three of our four teams were able to build prototypes at home without extensive lab access.”
— Dale Yocum, Robotics and Engineering Program Director

PORTLAND, OR, UNITED STATES, April 1, 2021 /EINPresswire.com/ — Four students from Catlin Gabel are competing in the SourceAmerica Design Challenge, an annual competition that brings together high school and college teams from across the nation to develop concepts and prototypes of assistive technology that will improve the lives of people with disabilities.

The team’s innovative solution is a Ziploc bag opening and closing device, they call “ZipBag” that safely and easily allows people with limb differences and lower dexterity to handle resealable bags in a work environment.

The Catlin Gabel team was one of only five high school design teams, along with three college teams, in the nation to be chosen for the SourceAmerica finals. Winners will be announced at a virtual awards ceremony on April 7. This year, the ceremony will include a People’s Choice Award, with a winner selected by those watching the ceremony.

The ZipBag team, comprised of senior Eric Wang (the team leader), and sophomores Lucas Holliday, Ben Rosenfeld, and Keola Edelen Hare, partnered with the nonprofit On-the-Move PDX to deepen their understanding of the needs of those with disabilities. They then developed a concept, built a protype, and beta tested their invention. Utilizing foot pedals and a simple design, ZipBag requires the use of only one hand and a minimal amount of fine motor skills to operate. The student inventors created a video about the “why” behind their idea, the iteration process, and creation of the solution itself.

Though they were not selected for the SourceAmerica finals, three additional Catlin Gabel engineering teams submitted their ideas to the competition. Dale Yocum, who is the director of Catlin Gabel’s extracurricular engineering program, is especially proud of the way the students were able to collaborate remotely this year. “SourceAmerica didn’t think that teams would be able to fabricate prototypes this year, but three of our four teams were able to build prototypes at home without extensive lab access.” The three additional projects and teams are:

– Thread Tail Trimming – Kristen Cohrs (team leader), Kaz Malhotra, Megan Cover, and Josh Negreanu. In the garment industry, trimming extra threads (called thread tails) can be difficult for people with disabilities. This team created a 3D printed shell that integrates a shaver and vacuum into a device that makes this task much quicker.

– Integrated Time Clock and Task Tracking – Nate Sales and Seth Knights (team leaders), and Julia Kiaer. This team built a cloud-based application for a clock that not only tracks time, but allows people with cognitive disabilities to be more independent by keeping tabs on tasks that need doing while not assuming the ability to read.

SourceAmerica’s Finals Event and Virtual Awards Show streams on Wednesday, April 7, 5-6:30 p.m. PST, and is free and open to the public. All viewers are invited to cast their vote for the People’s Choice Award.

Lola Fitzgerald of California, has been invited to the U.S. Olympic Development Camp

Entre and X-Factor Capital invest over $7,000 in Founders of Color with Equity-Free Grants