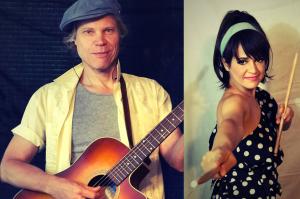 Iconic Indie Artist Paleface and Mo Will Perform as a Duo

Forty Plus Indie Artists Set to Perform Including The Accidentals, Willow Hill and Cliff Wheeler Band

LOS ANGELES, CALIFORNIA, US, April 5, 2021 /EINPresswire.com/ — Indie on Air CEO Jeff Popka has announced that the iconic Indie rock and alt-folk artist Paleface will headline the inaugural Carolina Indie Fest located in Sanford, NC on September 18th and 19th, 2021. Paleface will perform a high energy set along with his partner Monica “Mo” Samalot on Saturday night. Popka exclaimed, “First of all, we are thrilled that live music is returning and society is rediscovering a sense of normalcy. It has been a long arduous road but we feel very comfortable that in September all will be well regarding the pandemic. Secondly, to have a prolific and influential artist such as Paleface headline our inaugural Carolina Indie Fest allows us to highlight the return of exceptional live performances.”

PALEFACE
The duo will be performing music from their most recent release, the full-length album “Go Forth” along with other favorites. “Go Forth” was self-produced which was a first for Paleface. The album was mixed by Grammy-winning engineer Jason Carmer. John Greenham mastered the project. Greenham recently won three Grammy’s for mastering a Billie Eilish album.

Paleface was musically trained by the underground icon Daniel Johnston and ‘discovered’ by Danny Fields (The Stooges, The Ramones, The Doors) at a New York City open mic. Fields went on to manage Paleface for 8 years.

Paleface has been credited by major acts Beck and The Avett Brothers as an influence. He has actually performed and collaborated on three of The Avett Brothers albums. Beck has been quoted as saying about Paleface, ” We used to go to all the open mics together. He taught me Daniel Johnston songs on the sidewalk and let me sleep on his couch. He was a great songwriter, a generous friend, and a big influence on my early stuff.”

Popka adds, “Paleface is still a great songwriter and will influence a whole new generation of indie artists who will also be playing at Carolina Indie Fest. What an opportunity for music fans to discover new music and for emerging indie artists to perform alongside an industry icon.”

THE EVENT
Carolina Indie Fest is a two-day independent music festival that is community based and family friendly. The multi-genre event is the result of collaboration between Indie on Air, the Sanford Tourism Development Authority, Hugger Mugger Brewing, Downtown Sanford Business Organization and the title sponsor Wilkinson’s Chevy and Cadillac.

Three stages will be featuring more than forty emerging independent artists from all over the country. There will be a street level main stage, a beer garden stage and a singer/songwriter stage which will be located inside Hugger Mugger Brewing.

Indie on Air, led by Jeff Popka, has curated the talent using a vast network of artists from a decades worth of shows in Austin, TX during SXSW and elsewhere. Popka also screens talent for various radio stations and radio specials. ” I utilize a number of connections to identify artists we wish to present for live events across the country. I have a great relationship with the folks at Reverbnation as well. I typically run four campaigns a year via the platform which allows me to also find new artists. I am always looking and always listening. I love to discover new music. Showcasing these independent artists is my life mission.”

Carolina Indie Fest will also feature notable artists such as the Traverse City, Michigan based The Accidentals (Sony Masterworks), Nashville’s Willow Hill and The Carolina Music Award winning Cliff Wheeler Band (Country Vocal Artist of the Year 2020). Also appearing on Sunday, September 19th on the main stage will be the Nashville Non-Prophets and The Gasoline Gypsies along with (The Voice finalist) Rachel Messer.

This family-oriented event will also feature arts and crafts vendors, food truck row and an unique opportunity for anyone to perform acoustically on three “busker stages”. Anyone can bring their guitar and show the passing-by crowd what you have. More importantly everyone can discover new music in beautiful Sanford, North Carolina which is a music and arts loving community.