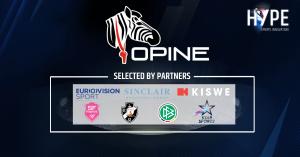 We’re excited to work with these global sports and media brands to provide their audiences a streamlined, contextual way to socialize at the speed of sport.”
— Joseph Higbee, Opine CEO

The collaboration stems from the HYPE Global Virtual Accelerator, where over 1500 applicants were trimmed to 30 startups. Sports media companies, clubs and leagues then selected startups with which to explore innovative projects.

“People around the world love watching their favorite team or big sporting events, whether on over-the-air and linear broadcast or OTT and streaming devices,” said Opine CEO and Founder, Joseph Higbee. “They want to socialize about the micromoments – or play-by-play – in a game. We’re excited to work with these global sports and media brands to provide their audiences a streamlined, contextual way to socialize at the speed of sport – with small social groups as well as the masses.”

The companies, with which Opine will work to explore new and innovative potential, reach across the spectrum of sports, covering almost every type of sport imaginable.

European Broadcasting Union includes Eurovision and members covering 400+ TV and 700+ radios stations across 56 countries. Most EBU broadcasters have group deals to carry major sporting events including FIFA World Cup, Tour de France and European Championships. Their breadth of coverage and distribution expands to such sports as biathlon, gymnastics and rowing.

The German Football Association (DFB) is the governing body of football (soccer) in Germany. They are in charge of the men’s and women’s national teams. With 21 state associations, 25,000 clubs and more than 6.8 Million members, DFB is the single largest sports federation in the world.

Kiswe is a live streaming technology company that delivers sports and entertainment content globally. Most notably, in 2020 Kiswe live streamed BTS’ virtual concert to 756,000 concurrent viewers across 107 countries and territories. Attendance was the equivalent of 15 shows at a 50,000 seat stadium and was the biggest audience for a paid virtual concert. They deliver games across Turner Sports, NBA, PGA Tour, Globo, NBA and MLS and more.

Club de Regatas Vasco da Gama is a Brazilian sports club and soccer team based in Rio de Janeiro. The historic football (soccer) team was formed in 1915. With over 23 million supporters, Vasco is one of the most popular teams in Brazil.

Stade Francais Paris Rugby plays in the top national league in France and is nicknamed the “Pink Army”.

“Until now, both private and public socialization during sports – via text, forums, comments, other social platforms – ran parallel with but separate from the game play in a live event,” commented Higbee. “Opine marries the game details with socialization – all at the speed of the game – which is very different than the experience you get with those other methods.”

About Opine
Opine is the leading social, real-time opinion analytics platform for live events. The company’s offerings deliver a new way to create, display and consume media during the micromoments of an event. Opine users do more.live as they express opinions at the speed of the event, both in private groups and among the masses. Opine has developed the first micro-moment social platform that roots socialization in the play-by-play activity of a live sporting event. The company’s standalone mobile and web applications, along with a robust API, provide streaming and broadcast partners, sports teams, clubs, universities, leagues and fans an experience tied closely to the game, with unparalleled engagement.