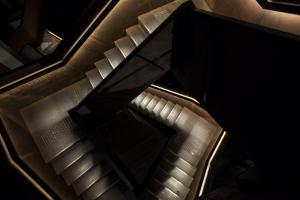 Descending staircase at the entrance of the MONA museum.

Approaching MONA from the sea.

An unusual museum amid a sea of usual suspects.

MIAMI, FL, USA, April 8, 2021 /EINPresswire.com/ — On March 1, 2021 the Carl Kruse Art Blog canvassed its readership with the question, “what is your favorite art museum in the world?”

Tabulation of the responses closed April 1, 2021 and we are pleased to announce that the Museum of Old and New Art (MONA) in Tasmania, Australia was ranked as the favorite art museum in the world.

The iconoclastic MONA was a surprise, even given the quirky followers of the blog, who voted as follows regarding their favorite art museums in the world:

Honorable mention in not art museums but “great,” “fun,” “uplifting” places of learning in order of votes:

The survey was a decidedly non-scientific experiment, with the sample size limited to the readership of an almost entirely English-speaking blog. However, we found it revealing in that many of the usual suspects landed on the list, with one unusual one on the top.

The Carl Kruse Art Blog is at https://carlkruse.net