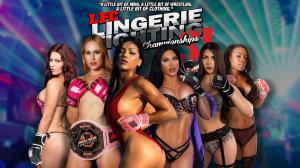 “We are very excited to be working with FilmOn TV,” CEO Shaun Donnelly says. “Their platform is one of the fastest growing in the industry and gives us an opportunity to reach a huge worldwide audience.”

FilmOn TV allows its users to access tv channels from all over the world, including news, movies and sports.

“We’re excited to welcome Lingerie Fighting Championships to the LiveOn TV family,” says founder and CEO Alki David. “Their unique style of MMA should be a hit with our users.”

Licensing arrangements for LFC showcasing on the FilmON TV platform was conducted by BRI.

In addition to events, FilmOn TV will be carrying all eight seasons of the Lingerie Fighting Championships reality series, LFC: Exposed! With several new seasons to follow.

“We want to give our fans as many options to consume our content as possible,” Donnelly says. “FilmOn TV will help us do that.”

LFC returned to action earlier this month with LFC31: Booty Camp 2, their most successful pay-per-view to date.