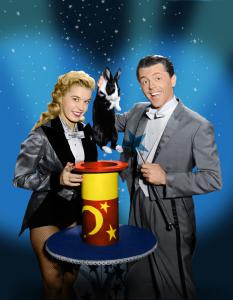 Mark Wilson and his wife Nani on the set of their CBS and ABC-TV series, Magic Land of Allakazam. 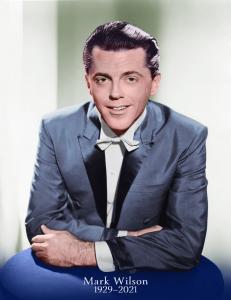 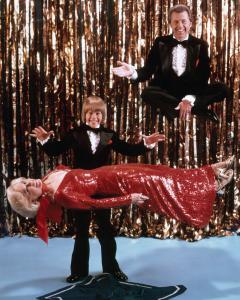 Mark Wilson, the magician who pioneered popularizing the genre for mass audiences, proving its viability on television and film, died at the age of 91.

They told me, ‘Magic won’t work on TV.’…Nani and I had proven, even with very competitive competition, that magic worked on network television.”
— Mark Wilson

LOS ANGELES, CA, UNITED STATES, April 7, 2021 /EINPresswire.com/ — Mark Wilson, the magician who played a pioneering role in popularizing the genre for mass audiences and proving its viability on television and film, died at his home in Los Angeles January 19 at age 91 of natural causes. In 1960, Wilson starred and produced the first network television series of its type, Magic Land of Allakazam, that ran on Saturday mornings for four years on CBS and ABC-TV, airing in international syndication thereafter. In addition to performing all over the world with his wife Nani Darnel and his children Greg and Mike, Wilson was the leading go-to expert providing technical assistance for application of magic in a broad array of media. He instructed actors who wanted to use magic in their roles (including Cary Grant and Johnny Carson) and supplied magic segments for many motion pictures, television productions, commercials, amusement parks and live attractions. He also authored the definitive instructional book on the craft The Mark Wilson Complete Course in Magic that has been in print since 1975. His company also has served the media industry by building and operating the largest warehouse of magic props and costumes, now under the stewardship of his son Greg Wilson.

Wilson was born in New York City on April 11, 1929 and spent a good portion on his childhood on the road as his father was a traveling salesman. Growing up in the Great Depression, his parents instilled in him a “never give up” mentality. As an 8-year-old, Wilson was staying at a hotel in Indianapolis with his parents where a magician was performing. He was captivated and went out immediately to a nearby bookstore to buy a book of card tricks to try to duplicate what he had just seen. From that point forward he spent every cent of his allowance on magic tricks, eventually getting a job at a store where he demonstrated products.

He went on to study advertising and marketing in Southern Methodist University, paying his way by performing more than 50 shows a month for local organizations in the Dallas area.

His education would soon serve him well in convincing doubtful TV sponsors. He wrote of the bias the genre faced: “They told me, ‘Magic won’t work on TV anyway… because everyone who sees your show will think the magic is done the same way as on Rocket Man,’ which was on the air then. Years later, as an example, it would be I Dream of Jeannie, or My Favorite Martian, or whatever television show was using a lot of trick photography at the time.” Through tenacity and hard work, Wilson built a successful track record, beginning with local TV shows until a growing cadre of advertisers including Dr. Pepper, 3M, Kellogg’s and Frito Lay were signed on. “Within a few years,” Wilson concluded, “Nani and I had proven, even with very competitive competition, that magic worked on network television.” His last television series, The Magic of Mark Wilson, aired in national syndication in the early 1980s.

Whether on the little screen or in front of audiences at the Great Wall in China or Albert Hall, Wilson always ended his performances wishing his audiences “Happy Magic.” In helping pave the way for expanded popularity of magic and help educate newer generations of magicians such as the late Siegfried and Roy and David Copperfield, Mark Wilson’s gift to the world will be continue to be passed forward.

Other high-res photos and video can be downloaded from: https://allakazamarchives.com.
Photo Credit: Courtesy of Greg Wilson

Geek Window Cleaning to Homeowners: Windows Need as Much Care as the Pool and Lawn