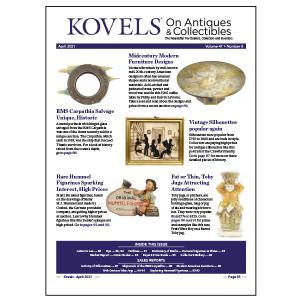 Kovels’ April 2021 newsletter features silhouettes, Toby jugs, modern tables, Hummels, and the shipwreck of the RMS Carpathia, all with photos and prices.

CLEVELAND, OHIO, US, April 7, 2021 /EINPresswire.com/ — Bidders were charmed by antique silhouette portraits offered at a Connecticut auction and featured in a sale report in Kovels On Antiques & Collectibles April 2021 newsletter. They are early “snapshots” — images of loved ones or famous people captured before photography was commonly available or as an alternative to pricey miniature painted portraits that were in fashion at the time. Kovels’ pictures examples of the cut paper artwork, some embellished with watercolor or needlework, that sold from $200 to $1,400. And find one that is treasured by the Kovel family!

“Toby” jugs, 17th- and 18-century mugs depicting quirky drinking characters, sold to enthusiastic collectors at a London auction where prices peaked at more than $100,000. See their intricate details and learn about their colorful history and what makes them different from “character” jugs in Kovels’ April issue.

Items from the wreck of the RMS Carpathia, the ship that had helped rescue Titanic survivors some years before, were auctioned in Atlanta. Kovels’ latest newsletter pictures some of the salvaged objects including pottery, porcelain, glass, and parts of fixtures that all help capture that moment in time.
Tables by well-known mid-20th-century designers attracted interest and high prices at auction in Dallas where a walnut and rosewood slab table by George Nakashima took top honors at over $40,000. See it in Kovels’ April issue along with other tables with modern forms and unconventional materials and their prices.

And collectors do love their Hummel figurines! They were some of the most widely collected porcelains in the 20th century, though never an “investment.” Many find it hard to understand why prices are so low when they are ready to sell or trade. Kovels’ April newsletter pictures some sweet Hummel figurines that brought very sweet prices at a recent Florida auction, and explains why, along with pictures of the Goebel / Hummel trademarks on the bottom that help identify and date them.

Don’t miss the April market report on pricey comic books. The illustrated Collector’s Gallery answers readers’ questions about a brass ashtray with a risqué embossed design, a Catalina pottery vase, a prototype of a hydraulic lift hospital bed, and a Helmar Turkish Cigarettes advertising sign. And more than 70 antiques and collectibles are listed in the April Buyer’s Price Guide.

Kovels’ monthly newsletter is available as a print subscription, or as a digital version that is included in the Kovels Knowledge and Kovels All Access memberships. Start your Kovels Knowledge Free Trial.

About Kovels
Terry Kovel and Kim Kovel provide collectors and researchers with up-to-date and informed information on antiques and collectibles. The company was founded in 1953 by Terry and her late husband, Ralph. The Kovels have written over 100 books, including their annual Kovels’ Antiques & Collectibles Price Guide, now in its 53rd edition, as well as dozens of leaflets, and three series about antiques for television.

Kovels.com, online since 1998, offers a bird’s-eye view of the market with news, information and over 1 million prices. Readers will find auction reports, readers’ questions with answers, a marks dictionary, and identification guides covering antiques and collectibles from 1750 to 2010. Also included is the digital edition of Kovels On Antiques & Collectibles Newsletter with 46 years of archives. To stay in touch, subscribe to Kovels’ free weekly email, Kovels Komments, at Kovels.com.