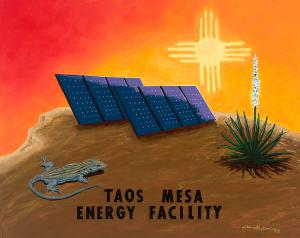 “Kit Carson aims to be the greenest co-op in the country. The addition of these two new solar arrays gives us almost twenty solar projects within our territory, making Taos and the surrounding areas the “Solar Capital of the World,” said Luis Reyes Jr., CEO of KCEC.

“Torch is honored to partner with Kit Carson on these two projects in support of Kit Carson’s efforts to become a fully renewable powered utility,” said Jon Kilberg of Torch. “This is a major milestone for both the communities of Taos, the Village of Angel Fire and the nation! We are proud to play a role in Taos and Angel Fire’s transition to a green future.”

Through a long-standing financing relationship as Kit Carson’s largest private lender, CoBank provided the financing for both projects.

“CoBank Farm Credit Leasing is excited to finance a leading-edge solution that will help Kit Carson expand their energy resources and pair them with affordable renewable options,” said Landon Reneau, senior relationship manager with CoBank. “This is a major project with a number of intricacies that required all partners working together to meet key project deadlines. We look forward to the successful completion of their project in the coming months.”

KCEC and Torch have selected local New Mexico Engineering, Procurement, and Construction contractor Affordable Solar Installation (ASI) to build both the Taos Mesa location and Angel Fire project. Construction on the projects is expected to begin Spring 2021, with both projects to be fully operational by the end of the year.

“We’re ecstatic to work with a co-op that matches our passion for renewable energy and are honored to have been selected to help Kit Carson reach their goal of becoming the greenest co-op in the country. We’re hopeful this project will positively impact the Taos County and Village of Angel Fire communities,” said Kevin Bassalleck, President at Affordable Solar Installation Inc.

Once constructed, KCEC will surpass the 41 megawatts required to meet its goal of 100 percent daytime solar energy. Originally set to be reached by 2022, this goal can be achieved up to nine months earlier than anticipated..

These new developments build upon the arrays that KCEC has installed over the past 12 years, creating a network of distributed energy resources throughout the KCEC service territory, which spans Taos, Colfax, and Rio Arriba Counties.. Once complete KCEC with have a total of 53MW of renewable energy, including 38MW of solar and 15MW of storage capacity.

Torch Clean Energy is a privately-held renewable energy developer with extensive experience developing, permitting, designing and building both solar and wind projects. Torch has over 1,400 MW of projects under development throughout the United States, including over 550 MW of contracted assets that are expected to be constructed by 2023. To learn more about Torch, visit www.torchcleanenergy.com.

CoBank is a $159 billion cooperative bank serving vital industries across rural America. The bank provides loans, leases, export financing and other financial services to agribusinesses and rural power, water and communications providers in all 50 states. The bank also provides wholesale loans and other financial services to affiliated Farm Credit associations serving more than 75,000 farmers, ranchers and other rural borrowers in 23 states around the country. CoBank is a member of the Farm Credit System, a nationwide network of banks and retail lending associations chartered to support the borrowing needs of U.S. agriculture, rural infrastructure and rural communities. Headquartered outside Denver, Colorado, CoBank serves customers from regional banking centers across the U.S. and also maintains an international representative office in Singapore.

Having started in an Airstream trailer in 1998, Affordable Solar’s roots trace back to a passion for renewable energy, a strong commitment to community, and having fun. With many hundreds of megawatts of solar and energy storage projects completed and underway and 150+ employees, Affordable Solar has outgrown the Airstream but remains committed to the principles on which the company was founded.