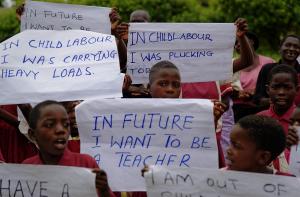 2013-03, former working children enrolled in a learning center supported by the ILO during a Fighting against child labour campaign (Region of Kasungu, Malawi)

In 2021, the global community-fighting child labour and forced labour is to address the challenges posed by COVID-19 and, accelerate progress towards the SDG targets in 2025 and 2030.

In a series of interviews, videos and presentations, partners at the forefront of the fight against child labour discussed their individual interventions and plans for how they intend to contribute to the implementation of the African Union Action Plan.

“The African Union’s Ten Year Plan of Action is ambitious and achievable. Over 10 years (2020-2030), we will all work together to protect the rights of all, including children involved in child labour. It is up to us to build the future of our continent,” said the Commissioner for Health, Humanitarian Affairs and Social Development, H.E. Amira El Fadil.

With already one in five African children working in 2016, the impact of the COVID-19 pandemic on the continent is expected to push more children into child labour. Indeed, it is estimated that a one percentage point increase in poverty leads to an increase of at least 0.7 percentage points in child labour. The overall situation is of great concern to families, employers and workers in Africa.

Panellists recognised the complexity and magnitude of the problem in Africa and discussed the different types of solutions, existing or envisaged, ranging from access to quality education for all, access to social protection, access to decent work for adults, extending the coverage of basic services and awareness-raising.

“Today’s event is a demonstration of the existing political will and a real commitment to ending child labour in Africa,” said Ms Cynthia Samuel-Olonjuwon, ILO Assistant Director-General and Regional Director for Africa, who called on governments, social partners and other organizations to allocate the necessary budgets to implement the key policy priorities identified.

“This should not be seen as a cost. It is an investment. An investment in creating a better future for all,” she continued.

Sharing her experience, Dibou Faye, a child labour activist from Senegal, called on stakeholders to redouble efforts in tackling child labour in communities for a brighter future.

“I have been working since I was 7 years old, I never went to school and at the age of 13 a husband was chosen for me. Today, children without education mean a society without evolution; child labour destroys dreams, stifles talents and increases poverty,” she said.

The event brought together Ministers responsible for Labour and Social Protection in Africa, representatives of regional economic commissions, continental bodies such as the AU Commissions, and the Pan-African Parliament.

In addition to the Economic Community of West African States, five countries, including Côte d’Ivoire, Morocco, Ethiopia, Malawi, Cameroon and Rwanda, described a number of existing interventions and institutional mechanisms, programmes and milestones, as well as pilot projects.

Discussing how to better address policy dialogue and strengthen existing mechanisms, stakeholders including the ILO Director-General Guy Ryder, the Chair of the Alliance 8.7. and representatives of UNICEF and FAO as well as the Nobel Prize Laureate Kailash Satyarthi emphasized the importance of supporting the AU Action Plan and called for stronger commitments.

“I call on you today to help fight against child labour by committing to act this year and beyond,” said Congolese musician Lokua Kuanza.

Members of the donor community presented multiple interventions across Africa as well as their projections and pledges for 2021 and beyond. These include the ILO’s projects such as the Clear Cotton project in Mali and Burkina Faso, which is funded by the European Union, and Accelerating Action for the Elimination of Child Labour in Supply Chains in Africa (Accel Africa), a project funded by the Ministry of Foreign Affairs of the Netherlands.

“With the ILO’s vast experience and expertise, we know what works! We also know what does not work! It is now time to act! It is time to scale up what we have achieved through pilot projects and interventions,” said Samuel-Olonjuwon.

Stakeholders and individuals at the regional, national and organizational level have been encouraged to pledge by identifying concrete actions they will take by December 2021 to help end child labour. The deadline for submitting pledges is 15 May 2021. Under the 2021 campaign, leaders are invited to document their efforts and progress throughout the year through videos, interviews, and blogs and impact stories.

The Minister of Labour of the Republic of South Africa, H.E. Thembelani Thulas Nxesi, announced that the 2022 Global Conference on Child Labour will be held in Africa for the first time, and hosted by South Africa.

“These figures that you have given us today on child labourers are not just statistics, but children! These statistics represent real children who are most likely on their way to work, actually working, or returning from hours of hard labour as we speak. The children of Africa and of the world have their eyes on you in how you define our future,” said Stacey Fru, a child Activist.