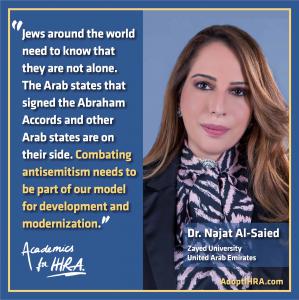 IMPAC aisbl is an international NGO which promotes dialogue and peaceful coexistence between people who, despite their differences, wish to build cultural bridges and share a common future. Focus is on Europe and the Middle East.

At a time when antisemitism is increasing, letter published today calls for open dialogue and critical discussion with people of good faith worldwide.

Jews need to know that they are not alone. The Arab states that signed the Abraham Accords are on their side. Combating antisemitism needs to be part of our model for development and modernisation.”
— Dr Najat Al Saied, independent researcher at Zayed University, UAE

BRUSSELS, BELGIUM, April 6, 2021 /EINPresswire.com/ — The Adopt IHRA Coalition is an umbrella group of more than 145 NGOs from around the world that calls for the support and the adoption of the IHRA definition of antisemitism by companies, institutions and governments.

Today, the Coalition will publish a letter of support for IHRA by hundreds of academics.

IMPAC is a member of the Coalition. IMPAC condemns all forms of racism. The IHRA definition is a critical tool that can and should be used to protect Israelis and Jews worldwide when they are being threatened and attacked by those who falsely hide behind “freedom of expression” to excuse their racist behaviour.

We call upon academics from all over the world to add their names to the letter, and thereby join those wishing to stamp out antisemitism.