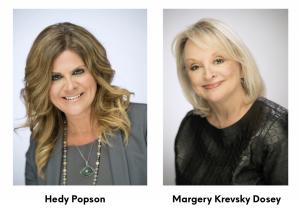 People have always been our greatest commodity and what companies need right now is talent who can provide brand awareness and human connection.”
— Hedy Popson

BINGHAM FARMS , MICHIGAN, USA, March 24, 2021 /EINPresswire.com/ — Founder of Productions Plus, Margery Krevsky Dosey, announced that Hedy Popson will lead the company as CEO. Popson, who was groomed by Krevsky Dosey for the position, replaces the founder as CEO. The premier, boutique, full-package product talent agency is celebrating its 40th year and was founded in 1981 by Krevsky Dosey.  Productions Plus began in Detroit and now has offices in four major cities across the country —Los Angeles, New York City, Nashville and Dallas. Most recently, Dallas became a SAG-AFTRA franchised agency.

Margery Krevsky Dosey will transition to Chairman of the Board and enthusiastically supports the new leadership, “Hedy Popson possesses the true qualities of a CEO.  Over the years she has demonstrated strong leadership and a steadfast commitment to high levels of success and achievement. Through her grace and tenacity she has gained the respect of colleagues and clients alike.”

In an unprecedented year of changes in all business, Popson says the strength of the brand is strong. “If the past year has taught us anything, it is that the mission statement of Productions Plus, providing excellence in brand representation, resonates more than ever,” Popson says. “Yes, the pandemic made everyone hit pause, but we didn’t need to reinvent ourselves. People have always been our greatest commodity and what companies need right now is talent who can provide brand awareness and human connection.”

Popson adds that the secret sauce of the agency is the internal team at Productions Plus who have vast experience in helping match talent to brands. With over 20,000 active talent and more than 1,000 people representing 17 clients in the automotive industry, Productions Plus has established itself as a leader in the marketing talent agency space. Popson has a unique advantage in the industry and brings to the role an expertise in all facets of the agency. She will lead the company as it continues to evolve and expand its newly launched Influencer Marketing and Research Divisions.

Her career with the company began as an automotive product specialist, formally joining the staff in 2004 as an account manager and rising through the ranks as a facilitator, Director of Training, and Executive Vice President before assuming her current role. A certified public speaker/facilitator and former member of the National Speakers Association, Popson has performed across the globe for audiences of over 5,000 people and has coached executives and key presenters from Fortune 100 companies.

Productions Plus is proud to be a certified women-owned, women-run business, contributing to growing diversified communities in each of its locations around the United States. Productions Plus has won many awards for its leadership and projects, most recently receiving the Salute to Diversity Award from CORP Magazine.