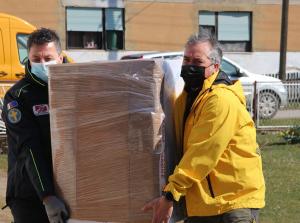 Ettore Botter (right), who leads the Volunteer Ministers of Padova, returned to Croatia with volunteers from other Italian Scientology Churches last week with a load of equipment and goods for those affected by the 29 December earthquake. 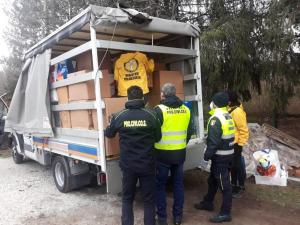 The truck was filled with refrigerators, stoves, heaters and other equipment and supplies for families that lost their homes or suffered major damage from the earthquake. 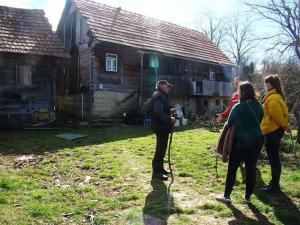 Once again, a convoy of goods and supplies took off from Northern Italian cities and headed east to Sisak-Moslavina County last weekend.

LOS ANGELES, CALIFORNIA, UNITED STATES, March 28, 2021 /EINPresswire.com/ — Nearly three months after the devastating December 29 earthquake in Croatia’s Sisak-Moslavina County, families who lost everything that day are still scraping by. The Red Cross, Sunflower Center for Community Development, Lions Club and other nonprofits have been working nonstop to provide for the needs of local families. But life in the economically depressed rural postwar region was already hard before the 6.4 magnitude earthquake and 16 subsequent aftershocks.

Volunteer Ministers and members of Pro.Civi.Co.S, the civil defense volunteers of the Scientology Community, from the Churches of Scientology of Padova, Torino, Milano and Verona loaded up donated supplies and headed east last weekend to help make life a little better in the region.

An elderly man in need of warm clothing, boots, blankets and water, lives in a house in the woods that can’t be reached by car, so the volunteers trekked there on foot over muddy mountain roads.

“His house was damaged in the earthquake, but he is not giving up and I hope to visit him a few more times this month,” said one of the Sunflower Center volunteers who walked to his home with the Volunteer Minister. She described the volunteers who have responded to the disaster as “love in action.”

The Church of Scientology Volunteer Ministers program is a religious social service created in the mid-1970s by Scientology Founder L. Ron Hubbard. It constitutes one of the world’s largest independent relief forces.

With the events of the 9/11 terrorist attacks in New York City, Scientology ecclesiastical leader Mr. David Miscavige called on Scientologists to redouble their efforts to aid their fellow man. He issued a directive entitled “The Wake-Up Call,” which inspired astonishing growth within the Volunteer Minister program.

The following year, Volunteer Ministers of Italy formed Pro.Civi.Co.S, which was entered into the registry of the National Department of Civil Defense.

Pro.Civi.Co.S has been on call throughout the pandemic, providing service to their communities. Their volunteers respond to disasters at home and wherever they occur, including Italy’s L’Aquila and Amitrice earthquakes, the Haiti earthquake in 2010 and the South Asia tsunami in Indonesia in 2005.

A Volunteer Minister’s mandate is to be “a person who helps his fellow man on a volunteer basis by restoring purpose, truth and spiritual values to the lives of others.” Their creed: “A Volunteer Minister does not shut his eyes to the pain, evil and injustice of existence. Rather, he is trained to handle these things and help others achieve relief from them and new personal strength as well.”

"I got elected to solve problems & I will handle two problems at a time,”- President Biden. All problems need attention.