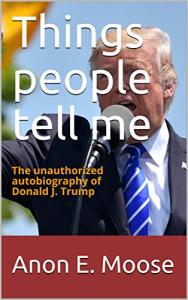 Cover of Things People Tell Me

Fictional “unauthorized autobiography” blows the lid off the most chaotic presidential term in history. Go behind-the-scenes for a humorous and satirical look.

CARY, NC, UNITED STATES, April 2, 2021 /EINPresswire.com/ — THINGS PEOPLE TELL ME, the unauthorized autobiography of Donald J. Trump, blows the lid off the most chaotic administration in history. Written under a pen name (Anon E. Moose) because he wasn’t awake for most of the events described, THINGS PEOPLE TELL ME goes deep inside Trump’s “very, very large brain” for a tongue-in-cheek look at the events that shaped his Presidency—his bromance with Kim Jong Un, how he single-handedly saving the U.S. Armed Forces from ruin by ordering more bullets, his intense preparation for debating Sleepy Joe, how he met Melania (she was his second choice) and his bungled coup.

This humorous and satirical “unauthorized autobiography” sheds behind-the-scenes light on these and other seminal events from his chaotic term as Dotard-in-Chief, as his BFF Kim calls him in the love letters they share. It’s all here in a series of one and two syllable words that even a third grader could understand.
“I decided to release this book on April Fool’s Day to commemorate the time I fooled 45.9 percent of American voters into thinking I cared about them,” said Trump, er, Anon E. Moose. “I’m pleased to announce that 100 percent of the proceeds will go to me.”

Read about Trump’s views on Winning in 2016: After my unbelievable landslide victory, the Democrats comforted themselves with the knowledge that Hillary Clinton had won the popular vote. That’s what you call a moral victory. Moral victories are for losers. Give me an immoral victory any day of the week. I cheated on all of my wives. Each time they dumped me I married someone hotter and younger. Win. I cheated my way out of Viet Nam and got elected to be Commander-in-Chief of the most powerful military in the world. Win.
On his top accomplishments: In August 2017, I became the first president to stare into a total solar eclipse with my naked eyes. Ignoring the advice of all those naysayer doctors and scientists who tell you to wear special sunglasses to view an eclipse, I looked directly at it. Not once, but three times. I saw spots and my head hurt for five days, but it was worth it. Obama never did that.

On lying: I set the record for telling lies so huge no one will ever top it. Future presidents won’t even try to break my record because they’ll know it’s impossible. It is the signature achievement of my administration. I want it etched on my tombstone: “Here lies Donald Trump, the lyingest President in United States history.” Then I’ll have them bury my body in an unmarked grave somewhere else so even my headstone will be a lie.
On telling his children he had lost the election: It felt like that Christmas when I forgot to buy them presents and blamed it on the Elves’ going on strike. I tried to make them see the bright side. They got to fly all over the world on Air Force One and get mocked by world leaders.

Read about Trump’s takes on other topics, such as how to ask foreign leaders for favors, how months of trying to catch COVID finally paid off, his ham-handed attempts at pulling off an October surprise, what really happened in Tulsa, how many sets of White House silver fit in one of Melania’s suitcases, how he aced his performance review with Vladimir Putin, and the different phases of the President’s annual physical exam (they’re not all pretty).

This book is the perfect memento of four years we’d all like to forget. Available on Amazon in e-book and paperback and free for Kindle Unlimited subscribers.

Note: A PDF review copy can be made available upon request. Single-chapter excerpts may be published with consent from the author, provided a link to the Amazon page is included.