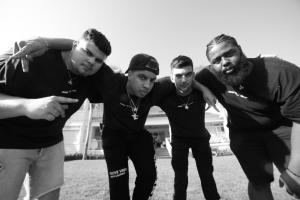 Nuke Squad Outside of the FaZe House 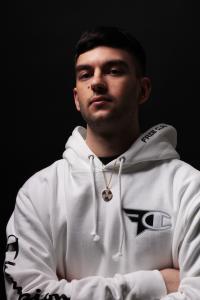 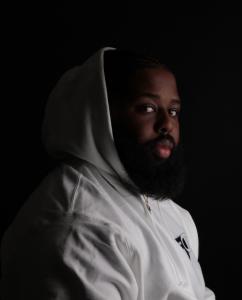 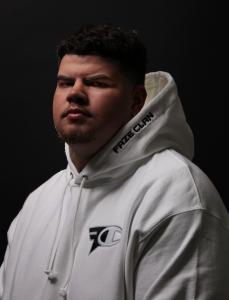 The members of Nuke Squad have grinded over the past year, collectively amassing over 7 million followers and entertaining their fans with their Call of Duty game play and their unique friendship even though they hadn’t actually met in person until fall of 2020. The quartet lives and breathes all things Call of Duty, which is the cornerstone game of FaZe Clan’s inception. Swagg, JSmooth, Booya and Santana are long-time friends who originally met through playing Call of Duty online. The name “Nuke Squad” was a suggestion from a fan in their Twitch chat and stemmed from when the four friends would get together to play Call of Duty and spend all day trying to obtain nukes, which only happens after a streak of 30 kills.

FaZe Clan has been working with Nuke Squad since they were invited to the FaZe Academy in October 2020. All four members of Nuke Squad – including FaZe Swagg – have gone through the FaZe Academy, an in-depth training program created to develop new members and help them realize their destiny as elite players and content creators. The FaZe Academy covers important topics such as FaZe Clan History 101, Cultural and Sensitivity Training, Code of Conduct Review, Media Training, Mental Health Awareness, Content Strategy and Creation, and Audience Development.

“The guys in Nuke Squad are walking symbols of FaZe Clan. They are all beasts in Call of Duty, engaging storytellers and incredible entertainers, ”says FaZe Clan founder FaZe Apex. “I’ve watched JSmooth, Santana and Booya grind in the Academy over the past several months as we’ve been working with them. Making them official members of FaZe Clan was a no-brainer. I know fans will be stoked to see them now playing side by side with Swagg as FaZe Clan.”

“JSmooth, Santana and Booya represent the next chapter of FaZe Clan,” adds CEO Lee Trink. “This group of incredibly talented new members is an example of our academy system at work. Our team has put significant time and resources into developing and supporting these creators over the past several months, and we’re so proud to see their growth. Welcome to FaZe, Nuke Squad. Big moves from here.”

Fans have already grown to love the Nuke Squad brand. In 2020, FaZe Swagg released two “Nuke Squad” merch lines with the first selling out in under two hours and the second almost quadrupling in sales, making it FaZe Clan’s most successful talent drop of 2020. To kick off 2021, FaZe Swagg hosted a community tournament “Nuke Squad’s Battle of the Bunker,” which saw over 3,500 registrants. More recently, FaZe Swagg and FaZe Booya took home the win in the Toronto Ultra $100K Payout event alongside fellow FaZe Clan member, FaZe Bizzle.

FAZE JSMOOTH:
Growing up, gaming was a way for Jordan “FaZe JSmooth” Cox to bond with his brother, dad, and uncles and he credits video games for keeping him out of trouble. When he wasn’t in school, JSmooth and FaZe Swagg were playing basketball on the courts and Call of Duty on their screens. JSmooth is the definition of grinding 24/7. Before becoming a full-time gamer, JSmooth was an assistant coach for a high school varsity basketball team and at one point was carrying 18 college credits, holding down three part-time jobs and still streaming regularly. The 23-year-old now holds a Bachelor’s degree in sports management and kinesiology.

FAZE SANTANA:
Dante “FaZe Santanta” Santana hails from El Paso, Texas and turned to playing video games after his parents’ divorce. He quickly found a community online and now his genuine and comedic charm draws thousands of viewers to his streams. Before streaming full time, Santana worked as a tutor and Special Education teacher after receiving his Bachelor’s degree in Education and a minor in Child Development. Over the past year, he has created an impressive fan base and recently passed 75k subscribers on Twitch.

FAZE BOOYA:
Ean “FaZe Booya” Chase might be calm and quiet but he is a beast in the Call of Duty scene. His raw game play captured FaZe Clan’s attention and his best game ever in Call of Duty: Modern Warfare Warzone has 51 kills and 16k damage in solo squads. Within the last year, Booya’s YouTube channel has started to garner more and more attention with his hottest video having over 2 million views. Before becoming a full-time gamer, the Jacksonville native received an Associate degree in Science, but hopes to be in the gaming realm for the rest of his career.

About FaZe Clan:
Since its inception in 2010, FaZe Clan has established itself as the world’s most prominent and influential gaming organization known for its disruptive original content and hyper-engaged global fanbase of 345 million combined across all social platforms. FaZe Clan holds an unrivaled position at the epicenter of gaming, sports, culture and entertainment, driving how the next generation consumes content, plays and shops. Their roster of 85 influential personalities consists of world-class gamers, engaging content creators and a mix of talent beyond the world of gaming, including NBA star Ben Simmons, Lebron “Bronny” James Jr and Lil Yachty. The organization’s unmatched esports division includes seven competitive teams in Fortnite, FIFA, PUBG, PUBG Mobile, Rainbow Six, Call of Duty League (Atlanta FaZe) and CS:GO with dozens of world championship trophies among them. In addition, FaZe Clan has become a sought-after fashion and lifestyle brand through an inspired apparel line and limited-edition collaborations with partners including Champion, NFL, Manchester City FC, Lyrical Lemonade, Kappa, CLOT, LA Kings, and more. Follow us @FaZeClan, @FaZeApparel and @FaZeUpdate.