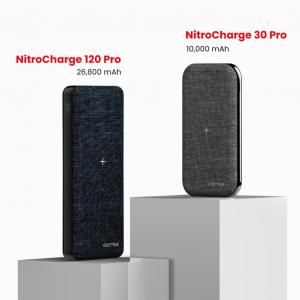 There are many kinds of wireless power banks on the market, but they all have their own disadvantages. Some are super slow while charging, while some only have limited charging ports, and the worst is that wireless power banks get disconnected all the time with the slightest movement.

This is why we decided to make the ultimate power bank series. NitroCharge 30 Pro & NitroCharge 120 Pro revolutionize wireless charging through its unique patented technology.

With its magnetic positioning technology, Nitrocharge Pro Series ensures your phone is always charging, even when you are on the go.

1. MagSafe Compatible Wireless Charging: The NitroCharge Pro Series will be the first ever power bank that works with MagSafe.

2. Keep Your Phone in Place: The wireless charging process can be easily disrupted with the slightest movement. NitroCharge Pro Series’ integrated MagSafe positioning technology inside the power bank ensures your iPhone stays in place to keep it powered throughout the day.

3. Larger Power Output: With an output of 30W (10,000 mAh capacity) and 120W (26,800mAh capacity), the NitroCharge Pro Series is more powerful than ever. Charge your phone, and your Macbook Pro simultaneously.

About EXCITRUS
Our mission at EXCITRUS is to create high quality products that bring ease and convenience to our user’s lives. Our power banks have been embraced by some of the largest US and Canadian retailers, such as Microsoft, Best Buy, Office Depot, Canada Computers and TheExchange. We plan to continue to bring new and exciting innovations to the tech industry in the
coming future.