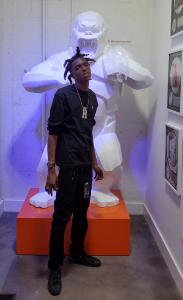 CLEARWATER, FLORIDA, UNITED STATES, April 1, 2021 /EINPresswire.com/ — Young freestyle lyricist who goes by the stage name Ggmg Remo is taking rap by a storm. The upcoming and emerging artist surfaced last year when his album ‘Ok Ok 3’ hit over one million streams globally. However, this was his second production, the first production being a single titled “Who F’in With Me?” It was released in 2019.

Following the phenomenal success of the album ‘Ok Ok 3’, the artist made a comeback this year with another set of album releases that are going to be released in three parts. On February 14th, this year, Ggmg Remo released his second album, which is also the first part of this series of three albums. The album titled ‘Goat shit pt 1: Up Next’, is also scheduled to be released on the indie label, Another Hood Classic Productions. This achievement will be unique because Ggmg Remo will be the first mainstream hip-hop artist to have done so. With over 200,000 streams, the hottest song on the album is “Drip Drip”.

The artist’s second album has already been widely listened to; the tracks “Up Next” and “Winnin” in this album have already broken the artist’s personal two-week records in streams so far. With such successes piling up, the rapper can only be expected to grow in popularity.

The second album of this set, ‘Goat shit pt 2: Toxic Love’, is currently in the pipeline and can be expected to be released in June this year. It will be a distinct piece of work because it will be a complete R&B album intended to showcase the artist’s singing talent. Passionate about making music, he has already made plans for the third and final part of this album set. It will be due in October, and the theme will be ‘The Old Me.’ As the theme suggests, this album is intended to be a throwback to an earlier time in his singing career, emphasizing his raw freestyle roots and street anthems.

With these three albums, Ggmg Remo will have released over thirty tracks in one year – an incredible feat.

The twenty-four-year-old rapper and singer is on his way to the top, with his unique, raspy, energetic, and metaphor-laden delivery engaging his listeners all the way. Hip hop enthusiasts of all ages will enjoy his songs.

For more information on Ggmg Remo and to buy his music, please visit his website.

Raheem Strawder, or Ggmg Remo, also nicknamed “Da Goat” by his friends, is an upcoming young artist. Born and bred in Clearwater, Florida, or “Wick City,” Ggmg Remo has been singing since the age of nine. Enthusiastic and driven to express himself through rap, the versatile artist is set to take hip hop and r&b by storm.