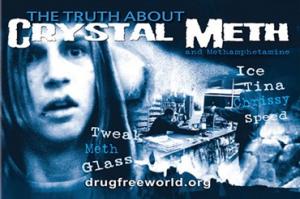 There is a lot of talk about drugs in the world. Some of it is true, some not. Much of what you hear about drugs actually comes from those selling them. Reformed drug dealers have confessed they would have said anything to get others to buy drugs. Don’t be fooled. 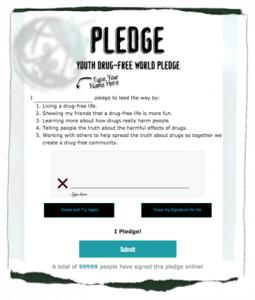 Foundation for a Drug-Free World materials are in use by tens of thousands of schools and over 800 law enforcement agencies. In doing presentations to youth groups, youth are encouraged to sign the Youth Drug-Free World Pledge to be drug-free. 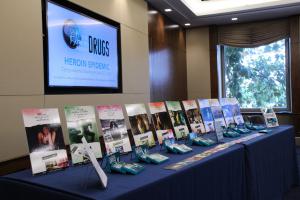 The Truth About Drugs Education Package is offered as an aid to educators who teach 11-year-olds and above in a classroom or community setting. There is also a Truth About Drugs online curriculum and downloadable resources. All are available at www.drugfreeworld.org.

From the “Rush” through “Withdrawal” now you can recognize each stage of descent into meth purgatory.

False ideas like ‘meth is just a party drug,’ or ‘meth helps you stay up late and study’, can lead uneducated youth to make decisions that ruin their lives.”
— Thalia Ghiglia, Foundation for a Drug-Free World faith liaison

WASHINGTON, DISTRICT OF COLUMBIA, UNITED STATES, April 7, 2021 /EINPresswire.com/ — Recent news stories describe famous people who became addicted to meth and almost ruined their lives. How do famous and even everyday people fall into addiction to meth, if it is so bad? Is it because people normally get their first information about meth from the people who sell it?

The free publication “The Truth About Crystal Meth” lays bare the simple facts about this drug.

“When people take methamphetamine, it takes over their lives in varying degrees,” according to the booklet. It explains with great clarity each step of the high and how it would easily addict anyone who uses the drug. It makes it very easy to understand the sharp increase in use over the years culminating with many overdoses.

Crystal meth’s effect is highly concentrated, and many users report getting hooked (addicted) from the first time they use it. “I tried it once and BOOM! I was addicted,” said one individual who lost his family, friends, his profession as a musician and ended up homeless due to his addiction to meth.

Users of meth get a strong desire to continue using it because the drug creates a false sense of happiness and well-being—a rush (strong feeling) of confidence, hyperactiveness, and energy.

This national scourge is raging despite the pandemic and some feel, because of it. Isolation has deepened depression and also cut people off from their support systems. According to South Miami Recovery, “Crystal meth is highly addictive and extremely dangerous. When someone is addicted to crystal meth, not only is the potential for COVID-19 complications more serious but the long-term health effects can also be devastating.”

Crystal meth can be lethal, but even when it doesn’t kill the individual it can also cause a plethora of other serious problems, such as “tweaking,” which is described this way: “A methamphetamine abuser is most dangerous when experiencing a phase of the addiction called ‘tweaking’—a condition reached at the end of a drug binge when methamphetamine no longer provides a rush or a high. Unable to relieve the horrible feelings of emptiness and craving, an abuser loses his sense of identity. Intense itching is common and a user can become convinced that bugs are crawling under his skin. Unable to sleep for days at a time, the abuser is often in a completely psychotic state and he exists in his own world, seeing and hearing things that no one else can perceive. His hallucinations are so vivid that they seem real and, disconnected from reality, he can become hostile and dangerous to himself and others. The potential for self-mutilation is high.” (Excerpt from “The Truth About Crystal Meth”)

Additional danger comes from the toxic products used in the manufacturing of meth that include battery acid, drain cleaner, lantern fuel and antifreeze. The production process can lead to explosions at the labs, and the waste products are also toxic.

One of the reasons individuals can become physiologically dependent on meth is that it causes changes in the brain. Drugs piggyback on already existing biological pathways but in a perverted way. Dopamine is a brain chemical associated with the sensation of pleasure. It is usually released after eating, sex, and other pleasurable activities. This pathway can get hijacked by methamphetamine use. Use of meth can result in extreme weight loss, brain damage and memory loss.

Thalia Ghiglia, faith liaison for the Foundation for a Drug-Free World, teaches justice-involved youth about crystal meth because she feels it is an enticing drug that has been used to exploit many of our youth.

“False ideas like ‘meth is just a party drug’ or ‘meth helps you stay up late and study’ can lead uneducated youth to make decisions that ruin their lives,” explains Ms. Ghiglia. “We must educate our children about meth. The free courses and books from the Foundation for a Drug-Free World make this possible.”

The free booklet and a free online course are available from drugfreeworld.org to educate people on the many dangers of this

Readers can request or download The Truth About Drugs materials for use in drug education. The Educator’s Info Kit provides effective drug education resources that grab the attention of young people, keep them involved and leave them informed. The Foundation for a Drug-Free World materials are in use by tens of thousands of schools and over 800 law enforcement agencies across the globe.

“The Truth about Crystal Meth” is one in a series of free booklets that explains how various drugs are some of the most destructive ones manufactured. The Truth About Drugs Education Package contains practical tools to educate young people about substance abuse, including videos, mini posters and booklets.

The Foundation for a Drug-Free World is a nonprofit public benefit corporation that empowers youth and adults with factual information about drugs so they can make informed decisions and live drug free.

IAVWTR to Begin Certifying Exporters in China from May 2021