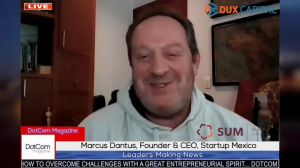 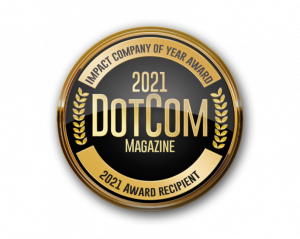 DotCom Magazine today announced that Startup Mexico has been selected to join its annual Impact Company of The Year List For 2021. The DotCom Magazine Impact Company of The Year 2021 Award celebrates the most important segment of the economy – America’s privately owned companies whose Founders, CEOs and Amazing Team Members are making an important impact in the economy.

DotCom Magazine has honored Startup Mexico as making a positive difference in an incredibly unique year. The DotCom Magazine 2021 Impact Company of The Year Awards celebrates shapeshifting entrepreneurs and their companies. When a company makes an impact, not only are they helping their clients, but they are also helping the world become a better place.

Andy Jacob, CEO of DotCom Magazine says, “We appreciate the selfless commitment that leaders and entrepreneurs make to their brand. We are honored to award great companies our DotCom Magazine 2021 Impact Company of The Year Award. At DotCom Magazine, we believe entrepreneurs are the heartbeat of the world in so many ways. We believe it is a world where risktakers must be lauded, saluted, and respected. 2021 is an incredibly unique year in so many ways. Companies have so many ways to make an impact, and that’s why each company’s unique impact is so important than ever before. Our award winners have courage and an unyielding passion to grow and contribute in incredibly unique ways.

Jacob continues, “In 2021, everyone talks about uncertain times. In 2021, we believe it is the leaders of impactful companies that stick their head up above the crowd, and say “we can do this”, “we will get it done”, “we will make this happen”, “we are willing to pay the price, and “we will turn uncertainty into opportunity. Our award winners are selected for leadership. Their company leads and their business system leads, we consider our award winners lamplighters. We believe we need more courageous entrepreneurs bringing light into the world by building compelling companies that make a difference.

About Startup Mexico (SUM) Startup Mexico is Latin America’s most ambitious entrepreneurship and innovation program whose purpose is to increase prosperity for the region. Startup Mexico was conceived by Marcus Dantus in 2013 and started operations as an ecosystem builder and incubation program in Mexico City in 2014. Since then, the company has grown to 10 campuses in various cities in Mexico and 8 more campuses in various cities in Latin America, it has also expanded its service portfolio to include acceleration, academic, venture building, soft-landing, SMB consulting, corporate innovation, and venture capital programs. In its 6 years of operation SUM has seen over 25,000 projects, helped over 4500 entrepreneurs and created over 900 new, innovative companies.

About the DotCom Magazine Impact Company of The Year Awards: DotCom Magazine celebrates the remarkable achievements of today’s entrepreneurial superstars — the privately held small businesses that drive our economy. At DotCom Magazine, we believe that the entrepreneurs of the world are the real superstars. We celebrate the risk takers that are committed to building a great company. From startups to more mature companies, from companies’ juts putting income on the books to companies with revenues in the millions and tens of millions, if a company is making an impact, DotCom Magazine is going to report on it. The 2021 Impact Company Awards are open to all companies for consideration. For more information visit www.DotComMagazine.com

Factana announces the launch of SFactrix.ai to transform manufacturing into Smart Manufacturing