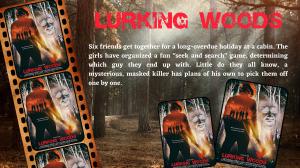 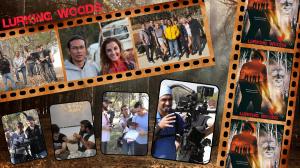 Lurking Woods Behind the Scenes Cast and Crew 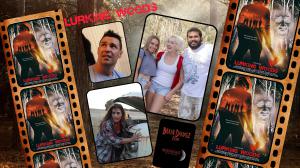 Lurking Woods Behind the Scenes Cast and Crew 1

Samera Entertainment gives us a behind the scenes look at this new slasher thriller from Midnight Releasing.

With this film we stepped up quality using a Red Dragon and invested in a Malaysian director. We had nine days to shoot a feature film, but with an awesome cast and crew we managed to pull it off.”
— Rod Manikam

This Ozploitation inspired horror show centers on three men and three women who have been friends for years. They plan for a relaxing weekend in the woods, and the women have arranged a clever game to determine who’s going to hook up with who. Unfortunately, their intended escapades take a backseat to the nefarious plot of a masked killer with a bloodthirsty desire to knock them off one by one in true slasher movie fashion.

“Lurking Woods was indeed a challenging assignment. An extremely limited time of nine days with eight hours spent daily on set forced me to think critically and made me more creative in making the movie. It was an astonishment. The audience screamed and jumped out of their seats during the screening.” — Rizal Halim (Director)

“With this film we stepped up quality using a Red Dragon and invested in a Malaysian director. We had nine days to shoot a feature film, but with an awesome cast and crew we managed to pull it off.” — Rod Manikam (Executive Producer)

Once post-production was a wrap, Lurking Woods became an Official Selection at the Urban Action Showcase International Action Film Festival, and is now on its way to your home theater with its VOD release from Midnight Releasing as of April 6, 2021.

“Scheduling was tight, we also battled with the weather as most of the filming was outdoors. This was our first thriller, and first time using an international director, at the end of the day I think we produced a great movie with a nice twist at the end.” — Darryl “Dizzy” Westrup (Co-Producer, Script Editor, and actor)

Attention bloggers, horror magazines, and freelance writers, for follow up interviews with the cast and crew, be sure to contact Sharry Flaherty of Samera Entertainment at: SameraEntertainment@Gmail.com or AcortAcquistions@Gmail.com

ABOUT MIDNIGHT RELEASING
Founded in 2009 by Darrin Ramage, Midnight Releasing is a premiere home entertainment distributor of quality independent genre films released only in the North America Region. With a following of thousands on social media outlets, Midnight Releasing continues to draw attention with each release.

ABOUT SAMERA ENTERTAINMENT
Sharry Flaherty CEO and Founder of Samera Entertainment is a seasoned and well known film producer and Acquisitions Executive for Midnight Releasing. Samera consults with filmmakers on their projects that are either in development, pre-production or post-production. Filmmakers are welcome to submit their horror and thriller titles to: SameraEntertainment@Gmail.com or AcortAcquistions@Gmail.com

PLUS BIOMEDICALS REINVENTS THE WORLD OF ORAL HYGIENE WITH CWASH Ⓡ