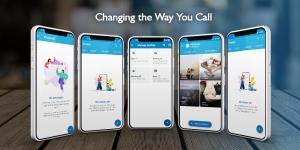 INDIA, April 6, 2021 /EINPresswire.com/ — I-Cube Access Global Pvt. Ltd., whose Ctunes mobile phone application is primed to change the way people make and receive calls, is positioning itself as the next Indian “unicorn” startup to achieve a multi-billion dollar valuation. This outcome appears eminently attainable. Indeed, Ctunes offers advertisers and marketers a superior value proposition compared to InMobi Pte, maker of the Glance app, which is preparing a $15 billion Initial Public Offering (IPO) in the United States.

The InMobi IPO has attracted a great deal of attention in India, as it would be the first private Indian company in the advertising domain to reach unicorn status with venture funding. However, InMobi’s flagship product, Glance, offers advertisers far less than Ctunes. With Ctunes, callers can customize and personalize content, whether curated or generated by the user, on a day-to-day basis, making it a unique marketing and advertising platform. These powerful personalization features enable Ctunes to deliver a high degree of user engagement with advertiser brands.

A calling party using Ctunes can decide, what the called party would be able to listen or see on their mobile device when they call them. This Calling Tune function includes songs, other audio, videos and movies. They can use social media and user-generated content on the app as well.
The application has a patent for Calling Tune in India and is seeking a global patent. Ctunes will initially be FREE for all Android Phone Users.

Ctunes’ Calling Tune stands in contrast to the existing Callertune service offered by mobile operators across the world and Glance by Inmobi. With Callertune, it is the called party who decides what the calling party will hear as the phone rings. There is no personalization or customization of service in this model. Users cannot generate their own content for the Callertunes, either. Ctunes offers both Callertune and its own patented Calling Tune service. The Ctunes platform also offers utilities for individual app users like Manage Calls, Voice Mail & MyCtunes functionality.

According to the Ctunes developers, the average time it takes to answer a call is 25-to-30 seconds. The platform has the ability to provide 100 percent of a user’s attention span for that amount of time. Given that attention is the commodity most sought by advertisers and marketers, Ctunes provides a potentially revolutionary technology that can transform the entire dynamic between brands and consumers. The company believes it can disrupt the digital-advertising market—now expected to reach $579 billion in 2021, according to a forecast by ad-agency network Dentsu.

Ctunes changes the way people make or receive calls. It enables users communicate before their call is connected. It is like Glance on a calling screen, but it offers a higher degree of user attention. Users have found it great for getting someone to pick up the phone. People on the platform can leave voice or video mail to any person whether or not they use the Ctunes platform and users can control whether to accept or reject any Ctunes configured by friends, family or colleagues.

The app, currently available on Android phones, also includes a donation button in its settings. This allows users to easily donate small amounts and more to the causes the believe in.

“We believe Ctunes is going to be great bet for investors venture capitalists to invest in during this early stage of our rollout,” said a company spokesperson. “While may apps provide seconds of mobile phone users’ attention, Ctunes provides an unrivaled amount of focus for callers, making it an ideal platform for the advertising community and one that is going to be in demand.”

Ctunes was founded by Kaushal Patel, who spent 11 years working in the telecom sector. The app was developed by I-Cube Access Global Pvt. Ltd., a startup incubated and accelerated by ICREATE. I-Cube Access Global received a grant from the government of Gujarat, India and ICREATE and has been successful in raising seed round at INR 12.5 CR valuation. Additionally, Ctunes was selected at selected at a Y-Combinator Startup School and was a 2018 NASSCOM Design4Inida finalist.

More information about the Ctunes application can be found at www.ctunes.biz or at the Google Play Store at https://play.google.com/store/apps/details?id=biz.ctunes.callingtunes