Cryptocurrency Project FROG.FINANCE Partners With SAVE THE FROGS!

SAVE THE FROGS! is the world’s most effective amphibian conservation organization. 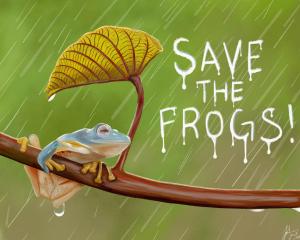 We are excited that the new cryptocurrency token, Frog, offers investors a fabulous way to both earn money and assist worldwide amphibian conservation efforts.”
— Dr. Kerry Kriger, SAVE THE FROGS! Founder

LAGUNA BEACH, CA, USA, April 8, 2021 /EINPresswire.com/ — The brand new cryptocurrency project Frog.Finance has solidified a partnership with SAVE THE FROGS!, a California-based 501(c)(3) public charity dedicated to protecting endangered amphibians worldwide. Through the partnership, Frog.Finance will donate 0.02% of every purchase, sale, and transaction of their cryptocurrency token, $FROG, to SAVE THE FROGS! each month.

In just the first 2 weeks of Frog.Finance’s existence, this has already raised over 5 million $FROG tokens for SAVE THE FROGS! — roughly equivalent to $175 at the current price. This was accomplished with only 1,350 holders of the token. Given that the value and adoption of $FROG is bound to rise, the partnership is expected to generate significant funds for SAVE THE FROGS!’ worldwide amphibian conservation efforts. Furthermore, the Frog.Finance team is planning to launch an online marketplace for frog art, the sale of which will also directly benefit SAVE THE FROGS!.

The mission of SAVE THE FROGS! is to protect amphibian populations and to promote a society that respects and appreciates nature and wildlife. Frog populations have been declining worldwide at unprecedented rates, and nearly one-third of the world’s amphibian species are threatened with extinction. Since 2008, SAVE THE FROGS! has been at the forefront of worldwide amphibian conservation efforts, having organized over 2,000 educational events to spread the word about the rapid disappearance of amphibians and empower citizens of all walks of life to protect their local frogs, toads, salamanders and newts.

The $FROG coin is similar to, yet different from more famous cryptocurrencies such as Bitcoin and Ethereum. To start, every transaction that uses $FROG gets excised. Whether you end up buying, selling, or sending $FROG, 2% of the transacted value gets removed. 1% gets instantly burned, removing it from the circulating supply, and the other 1% is proportionally given to all of the other holders of $FROG based on how much $FROG they own. This is the driving mechanic that serves to increase the token’s value over time and that also allows Frog.Finance to contribute a percentage of each transaction to SAVE THE FROGS!.

Initially, there was a total supply of 10 billion $FROG tokens. Due to the burn feature detailed above though, the circulating supply of tokens is now down to 4.6 billion tokens. The current market cap is approximately $150,000. Based on the trajectory of similar projects, the team estimates that the market cap could rise to over $10,000,000 in just one year. Naturally, this is a speculative market, and nothing is ever guaranteed, but the Frog.Finance team is very dedicated and knowledgeable and expects to find significant success in the performance-driven cryptocurrency market.

SAVE THE FROGS! and Frog.Finance are extremely excited to announce this partnership, and are optimistic about the positive impact it will have on worldwide wildlife conservation efforts!

You can learn more about Frog.Finance and how to buy $FROG tokens at:
https://FrogFinance.xyz

You can learn more about SAVE THE FROGS! and how to help endangered amphibian populations at:
https://savethefrogs.com

Spending on smartphones has risen 50 per cent in the past year, with users looking for ways to better protect devices