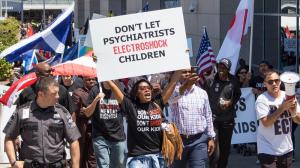 Due to physical harm resulting from ECT including death, memory loss, and permanent brain damage, CCHR is calling for people to sign a petition banning ECT.

SACRAMENTO, CALIFORNIA, UNITED STATES, April 8, 2021 /EINPresswire.com/ — The Citizens Commission on Human Rights of Sacramento announced that it is re-affirming its support for a ban against the continued use of electroshock therapy (ECT) and is asking people across the nation to sign a petition that directs the Food and Drug Administration (FDA) to prohibit its use.

The FDA has continued to allow the ECT device to remain on the market without clinical tests in spite of serious, even lethal results. This brutal “treatment” sends up to 460 volts of electricity[1] through the brain, inducing a grand mal seizure. For a comparison, that is enough electricity is to power five stadium lights.

Approximately 1.4 million people worldwide, including 100,000 Americans are electroshocked each year. This includes the elderly, pregnant women and children.[2] Many are involuntary patients or had ECT forced on them.[3]

Here are some of the dangers of eletrocshock:

Texas which is the only state to record deaths within 14 days of electroshock being administered, reported a death rate in recent years that represents an estimated 300 deaths nationally each year. [5]

In 2018, ECT device manufacturer Somatics added “permanent brain damage” to their list of risks from the treatment.[6]

Leading ECT researcher and advocate, psychologist Harold Sackeim admitted in the Journal of ECT that “virtually all patients experience some degree of persistent and, likely, permanent retrograde amnesia.” [7]

Psychiatrists claim electroshock therapy (now called “electroconvulsive therapy”) is safer now because they added anesthetics and paralyzing agents. Actually ECT is more dangerous than ever because the drugs and anesthesia raise the seizure threshold. Much more electricity is needed to induce a convulsion which then results in more brain damage.[9]

According to State Medicaid records obtained solely though through Freedom of Information Act (FOIA) requests, 19 states are currently electroshocking children, with 7 states shocking children between the ages of 0 and 5 under the guise of “treatment.”[10] This is contrary to the World Health Organization’s Resource Book on Mental Health, Human Rights and Legislation which states: “There are no indications for the use of ECT on minors, and hence this should be prohibited through legislation.”[11] In spite of this, psychiatrists have lobbied the FDA to widen their use of ECT on children.

ECT Does Not Cure:

In 2013, the principal investigator of a 20-year retrospective study at the Mayo Clinic admitted that their results showed ECT does not cure.[12]

So if ECT doesn’t cure anything and there are so many risks involved in using it, why is it not banned already? Is it related to the fact that 45%, or $2.4 billion of the FDA’s budget is paid for by industry user fees?[13]

“We cannot stand by and remain silent as thousands of women, children, the elderly or any person be brutalized by electroshock,” said Jim Van Hill, Director of CCHR Sacramento. “It’s time to put an end to this barbarism.”

Sign the petition to ban ECT at: https://www.change.org/p/ban-electroshock-ect-device-being-used-on-children-the-elderly-and-vulnerable-patients. For more facts, watch the documentary “Electroshock – Therapy or Torture” at https://www.cchr.org/ban-ect/ and get more data at cchrint.org.

The Citizens Commission on Human Rights is a nonprofit mental health watchdog, responsible for helping to enact more than 180 laws protecting individuals from abusive or coercive practices. CCHR has long fought to restore basic inalienable human rights to the field of mental health.

Inspired by author and humanitarian L. Ron Hubbard who wrote extensively on the human rights violations of psychiatrists, CCHR was co-founded in 1969 by the Church of Scientology and Professor of Psychiatry the late Dr. Thomas Szasz, Professor of Psychiatry Emeritus at the State University of New York Health Science Center in Syracuse.

7] John Breeding, Ph,D., “Electroshocking Children: Why It Should Be Stopped,” Mad in America, 11 Feb. 2014, https://www.madinamerica.com/2014/02/electroshocking-children-stopped/

A New San Diego Channel is Coming to Town